Break a leg is the old expression typically used to wish success to actors and musicians as they start their performance. For others, it is a saying of…. Well…. in the literal sense – a description of my trip to Tallinn, Estonia. Day 2, yes, DAY TWO, of the cruise…. We get into port in Tallinn. It is cold and blustery, so we stop in the souvenir tents that are set up a short walk from the ship and buy ourselves some warm gloves. We had packed for different weather, which meant we had one small and one large bag instead of our usual one suitcase rule. Oddly, the one thing we didn’t pack was gloves.

After buying our gloves we met our tour guide for the day, Sergei. We headed out to the subdistrict in Tallinn known as Kadriorg, where the unimposing home of Peter the Great stands. The office of the President of Estonia is located close by. Walking from Peter the Great’s House down the A. Weizenbergi path towards the stately Office of the President’s building, I decided to dig in my backpack to find my hat. Mistake. Memo to self: Never, ever should I dig in my backpack and try to walk at the same time. It’s sort of like walking and chewing gum – for some of us, this could be difficult. Before I realized what was happening, I found myself falling. With arms stretched out trying to break the fall, I hit the dirt hard, landing in the middle of the path. I looked back and saw a rock sticking up in the path and just to prove the saying “if it can go wrong, it will” …

I had tripped over the one and only rock in the perfectly smooth path.

As I scooted myself to the edge of the path so all the rubber-necking tourists who were staring at me could pass, I thought that since I didn’t hear the bone snap, perhaps it was just a sprain. After sitting a few minutes, I gingerly walked to the President’s Office, then down to the Kadriorg Art Museum, around to the other side and finally sat on a bench. It hurt. It was still early in the day and I didn’t want to miss seeing the rest of Tallinn.

After a stroll through the Kadrioru park and passing by the Children’s Museum, I realized that I’d probably broken a bone. I have Icelandic heritage, my great great grandmother pulled a handcart over the plains of the US, I’m tough – I can figure it out and keep going.

We walked back to the car, which put me at about 1 mile of walking on my broken leg and headed out to find a pharmacy. Sergei took us to the local mall where we were able to buy a cold pack, ace bandage and an ankle support. I wanted crutches but those could only be purchased if I went the hospital. Back in the car, we head out to the Tallinn Television Tower, the tallest building in Estonia standing at 314 meters (that’s a 1030 feet for us Americans).

Tallinn’s Old Town is a UNESCO World Heritage Site and one of the best-preserved medieval cities in Europe dating back to the 12th century. Old Town has two sections, Lower town and Toompea Hill. The lower town is filled with shops set in well cared for medieval buildings that take you back to a different time and age. Overlooking Lower Town is Toompea Hill, where we visited the Orthodox church, St. Alexander Nevsky Cathedral as well as the old castle that is now a government building, and had a great view overlooking Old Town, including Saint Olaf’s Church. Saint Olaf’s Church was once the tallest building in Europe from 1549 to 1625 and its tall spire is a landmark of the city. 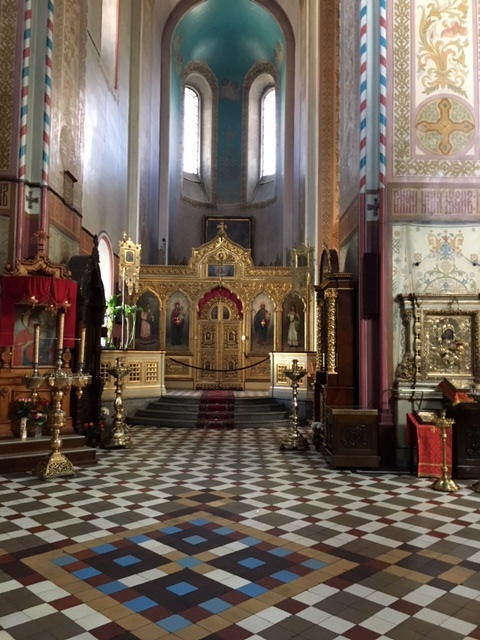 Heading out to the village of Viismi, we went to the Viismsi Outdoor Museum and strolled further back in time where bedding was made of hay, families had only one or two rooms to a house and used fires for warmth as well as for cooking. 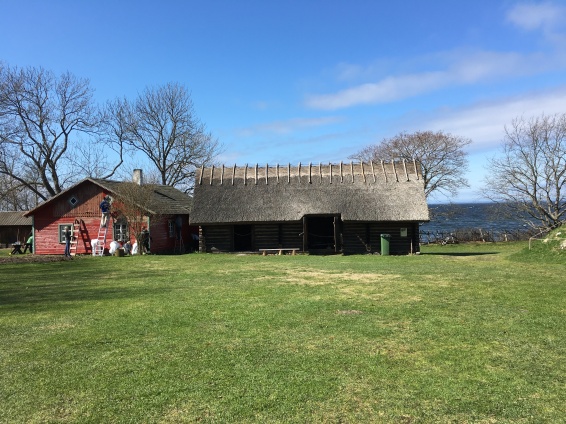 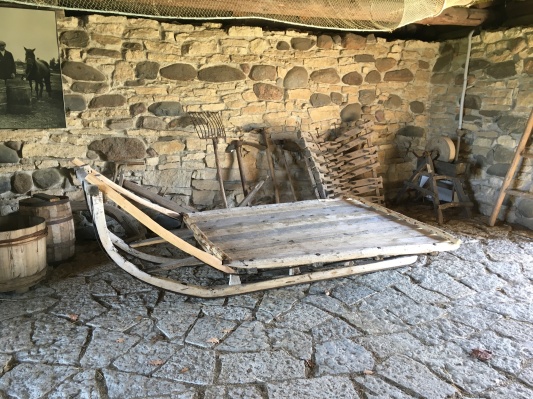 It’s a very well-done historical museum which sits right next to Paat, the upside down boat restaurant. 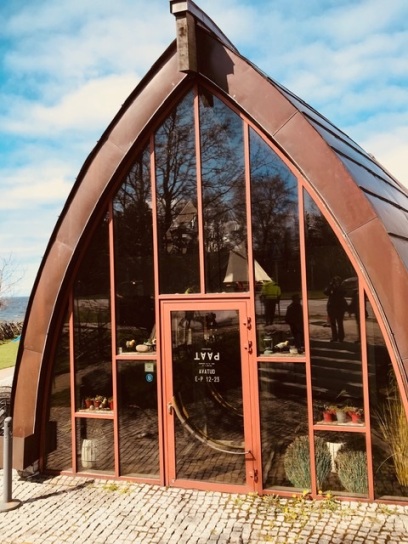 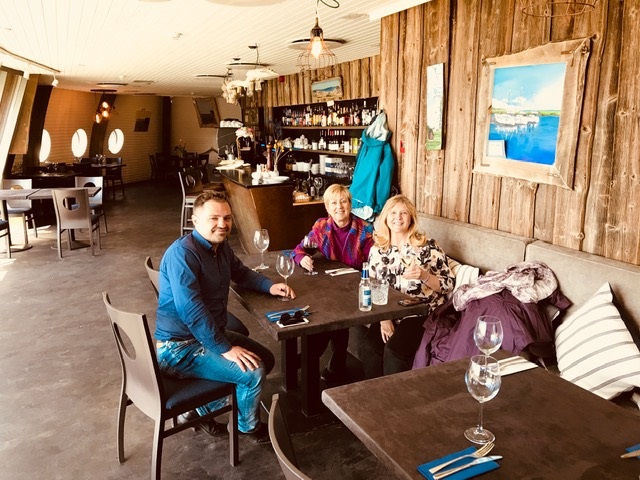 Paat, means boat in Estonian. We were greeted by the friendly owners and enjoyed a light lunch and a well-deserved glass of wine. From Viismi, on a clear day you can see the skyline of both new and old Estonia, a blend of the past and the present. We enjoyed the paintings on the wall and by the looks of my picture, you’d never guess I was in extreme pain and had spent more than 6 hours walking on a broken leg.

Sergei dropped us off for the long walk back to the ship at port. By now, my ankle was swollen, the pain was severe and I knew I needed to find the ship’s medical folk. Arriving there early enough to beat whomever else had fallen down and broken themselves, I was greeted by the front desk, had X-rays, met the doctor and was told that indeed I had broken my leg. I was met with incredulous stares and sounds when asked what time the fall happened (10a.m) and then asked where I had been all day, (walking tour of Tallinn), and told I was either tough as nails or crazy – to which I admit I am a bit of both.

Given the option of being able to return home with a full refund, or get a cast, crutches and pain meds so I could try and continue our journey, I opted for the obvious thing that any good Icelandic/Norwegian/German girl would do – took my crutches and left. I turned down the pain meds, laughingly telling Dr. Willem that a good mojito or glass of wine would be better medicine for relaxing.

Back in the cabin, we discovered that the bulky orange life jackets provided to us in case of emergency would make the perfect leverage for elevating my leg. Sticking the life jackets under the mattress made it as comfy as one could get on a cruise ship with a broken leg and a mojito in hand. I wouldn’t say I slept like a baby, but I did manage some sleep as the ship pulled up anchor and moved to St. Petersburg Russia. Awakening at 6 a.m to get off the ship and start our 2-day tour, I wondered how I would make it and briefly, ever so slightly wondered if I was making a mistake to stay….. then thought,