Ft. Lauderdale Florida is our gateway to the next cruise – the Panama Canal with stops in Cayman Islands, Costa Rica, Columbia, and Jamaica.

With tours set up in each port via Tours by Locals, our adventure starts off in Falmouth, Jamaica. It’s a 3 hour drive from my home in the small desert town of Ridgecrest to Los Angeles airport – a long boring drive. I head out in my rental car with the radio blaring and realize that the station is playing Bob Marley’s “Jammin.” Synchronicity!

After boarding the Island Princess, our ship leaves the port with a pilot boat escort complete with guns— and if they makes one feel a bit uneasy, at least the guard waves as he skillfully guides us out into the ocean while I sip on a freshly made mojito ….. and relax into a seat on my balcony.

Xaymaca— not the way we are used to seeing it spelled, but original! The port in Falmouth, Jamaica is very nice, if a bit commercial. The parent company of Princess cruise line purchased a run down area and built a lovely port in Falmouth, which has brought in much needed jobs to the community. While there were crafts being sold, they were mostly t shirts and other commercial products. I wish there were more home grown crafters at the market. I can buy a T-shirt, beach towel or cheap wooden trinket anywhere in the world…. I like to support the local craftsmen, but there wasn’t much available. I did buy a cedar bowl from Putty who was busy sanding and finishing them.

We met our guide for the day, Byron, at the port for a fun day at Dunn River Falls with a short stop at an old park built to memorialize the landing of Christopher Columbus in 1494. Just like two years prior when in 1492, Columbus “discovered” America by being lost, so too was he still lost in 1494, thinking he was in India and he “discovered” Jamaica.

While I hold old Chris’ hand to maybe redirect him, Cathy is greeted by the native Jamaicans, the Arawak’s. The park has some interesting old machinery and we met Devan who proclaims himself to be the park historian. He was a fun person who delighted in showing us around even though we all knew he was just having fun and earning a few bucks by being friendly.

Come Mr. Tally man and tally my bananas….. and so goes the song by Harry Belafonte… which I never knew there really was a machine that tallied bananas. It’s just a fun song I grew up listening to. As Devan explained to us, this little black box really did tally the bananas as they were loaded on ships by Jamaicans. Who knew? Devan was full of tidbits of information! 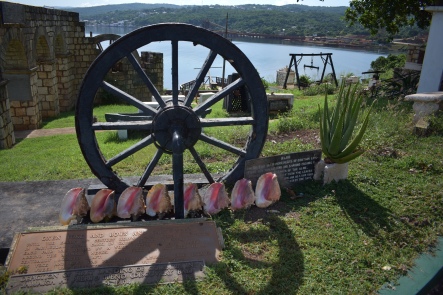 After our short stop, we climb back in Byron’s minivan to head to Ocho Rios. If you can count to ten in Spanish, you should know what the first part of the town named Ocho Rios means.  And if you think about the name of the beautiful Rio Grande that serves as a natural border between the US and Mexico …. You could probably figure out that Ocho Rios means Eight Rivers.  Originally called Xamayca by the Arawak Indians and then called Chorreros when Christopher Columbus claimed the island for Spain in 1494. When the British seized the island from the Spaniards in 1655, they mispronounced Chorreros as Ocho Rios.  So in that case, the area was first called the land of wood and water by the native people, then became rapid rivers via Columbus, and due to the Brits, it turned to Eight Rivers, which since there aren’t eight rivers, is a complete misnomer. True story according to Jamaican history….

Our adventure of the day is at The Dunns River Falls.  The Dunns River Falls is not only a national treasure but unique.  The falls are terraced like a natural set of stairs and with the help of some man-made changes, tourists can climb to the top of the falls.  The falls is one of a few in the world that are made up of travertine rock that empties into the ocean. The travertine rebuilds itself from the calcium carbonate in the spring water, which is said by geologists to create a living phenomenon.  Overall the falls are 180 feet high and approximately 600 feet long – with numerous natural pools where the water entices you to come in and relax.

We chose to use a guide to climb the falls. As Byron waited for us outside the main gate, Raphael Walker gathered our group of approximately 30 strangers where he put me at the front of the human chain and dubbed me #1. His hands were huge and gratefully his grip was strong as we started at the beach and began the 950′ climb up the falls with us each holding hands of the next in line, Walker, then me as #1, Cathy, a man named Red, his wife, a man from Colorado, his wife and down the line …. linked together. Our success or failure dependent on our ability to pay attention to details. Details… like pass info down the line such as where to safely step and where there was a monstrous hole that would swallow you up and dunk you if you slipped. Not everyone passed he information down and sometimes Walker would have to stop and go back to help people up a steep area or to yell at some one to follow the people ahead, often telling them to follow #1. Hilarious.

We paused at an outcropping where he asked me if I could swim and after answering in the affirmative, I found myself sitting down in a rock chute being shoved down a rock slide…. so #1 was the first to become completely and utterly soaked with water up my nose. Cathy and I laughed as we watched our fellow waterfall climbers blindly listen to Walker and sit down too as he shoved them down the chutes.

Onward we move as he tells me to lead the group to a tree and shallow pond while he insures everyone in the back is getting up the next section. As the group once again gathers, Walker grabs my hand and upwards we continue. Reaching another pond, he reminds me that I can swim, tells me to face him, and because I can be a slow learner, I obey, as he shoves me backwards into another pool of water. He yells, ‘ya man!’ And I have so much water up my nose, I just laugh as Cathy follows. She learns slowly too, I guess. Half the group is smarter as they walk to the left and step into the pool unaided…. but they missed the fun of being shoved backwards by our trustful guide!

Advice for those going to Dunn’s River Falls from #1: take a swimsuit as there are plenty of changing rooms, leave your camera in a locker ($8 fee with $3 refundable), be prepared to be very very wet, take a towel if you can, wear sturdy shoes with water shoes being the best choice — and most importantly- have fun and take the plunge! If your guide puts you in the rock slide chute — do it! And when he shoves you backwards into a pool of water, even with the water up your nose – remember this is a once in a life time experience so participate fully.

After changing clothes and returning to the parking lot at the Dunn’s River Falls, Byron offered us a local Jamaican beer called Red Stripe. I like my Guinness so wasn’t too sure about Red Stripe as it is a lighter Lager beer but we found it to be quite nice! A ‘highly recommend’ from me!

In Jamaica, you can’t help but think of Bob Marley and Reggae – and you can’t help hearing the beautiful Reggae music either. The trip to either of the museums dedicated to Bob Marley were beyond our reach for this trip, but he is revered throughout the Island and his music reverberates throughout our tour.

We had lunch at the popular Scotchies, which serves the famous jerk chicken. Unfortunately for us, they said the chicken was an hour away from being finished, so I opted for the chicken sausage which was quite nice along with a dough type fried bread that the called ‘the Festival.’ It was good but disappointing that we didn’t get a chance to try Jamaican jerk. While popular for guides to take tourists, I wouldn’t recommend Scotchies as a lunch spot — service was slow to nonexistent, couldn’t get the food we wanted even though it was noon, and really it didn’t feel friendly like the other places we were at in Jamaica.

The area around Ocho Rios and Falmouth is not a high income area but the people are friendly. We stopped in one neighborhood where I got out to take pictures and found an excited little girl with her grandpa. I asked her what they were doing with the string down this small hole and she excitedly told me they were trying to catch a small crab and then grandpa would give it to her to keep. I asked her if she did a lot of the things with Grandpa and she said he’s her best friend. She was adorable.

Returning to port a little early in the afternoon gave me time to relax and get a nice relaxing drink –tomorrow is a sea day where we will enjoy the spa, relax with Mojitos or Raspberry champagne drinks and get ready for our next stop — Cartagena Columbia.