This great story of the Panama Canal was part of American history and geography when I was growing up.  It was a marvel of engineering, as well as a statement to how hard people will work to achieve a tremendous feat. Ultimately completed under the stewardship of the United States, the original attempt was via the leadership of Ferdinand de Lesseps of France in the late 1800’s. Where France failed, Americans would later succeed in creating a canal that connects the Atlantic Ocean to the Pacific Ocean.

Politically, the purchase of the canal has an interesting history.  The purchase of the land was originally authorized in 1902 for $40 million dollars.  At that time, Panama was part of Columbia.  When those negotiations fell through, President Roosevelt then encouraged the Panamanians to rebel, which in 1903, Panama declared their independence. The US the purchased the land for the canal from Panama for $10 million.  By the time the canal was completed, the US had invested $375 million. 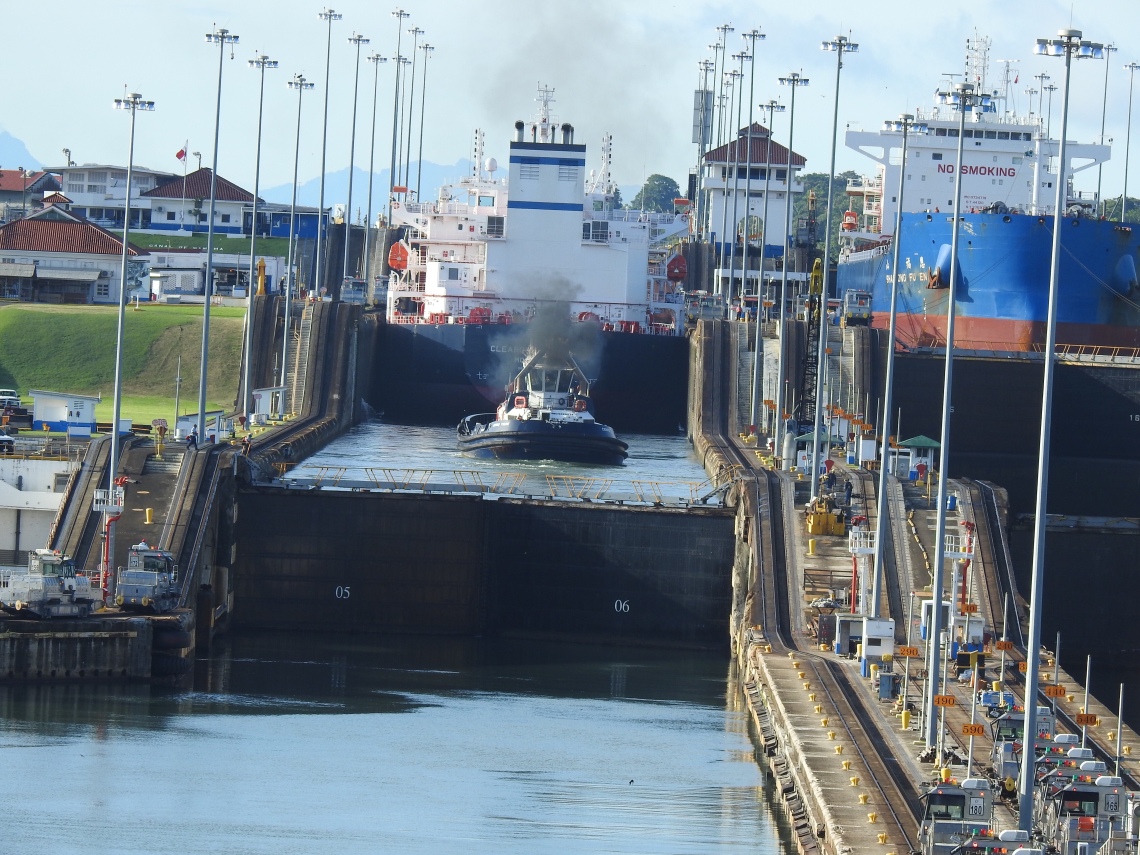 It took over 10 years for the canal to be completed.  The day to day life of the workers was rough with a minimal amount of things to do during the off time other than drink.  The YMCA was brought in to manage recreation which provided a library, cinema, bowling alleys, softball fields among other activities to improve the moral of the workers. The ‘mules’ are modernized over the years, but the function remains the same – the mules help guide the ship into the locks and stabilize the ship while the water is adjusted.

There were also health risks due to malaria and yellow fever.  During the French efforts, more than 20,000 people succumbed to disease.  When the Americans began their effort, it was critical to address the health issues. William C. Gorgas was an expert in tropical diseases and was one of the first to recognize the transmission of malaria and yellow fever by mosquitoes.  Controlling the mosquito population was a major success in reducing these diseases and improving the health of the workers. Still, over 5,000 people died from accidents and disease.

Completed in 1914, the first ship to go through was a French crane boat, while the official grand celebration was delayed due to World War I.  On 15 Aug 1914, the SS Ancon successfully navigated through the canal. once we were in the third gate and the water level adjusted, the final two gates opened out to Gutan Lake.

The canal changed the world’s shipping patterns.  Instead of utilizing the Drake Passage and Cape Horn, the canal cut off 7800 miles for a trip from New York to San Francisco.  The canal was also a vital part of military strategy in World War II. When the US needed to transfer ships during the war, the canal was utilized which got the ships and aircraft carriers to their needed areas quicker.

One of the largest difficulties was cutting through the rock at the continental divide. Known as the Culebra Cut, it took over 6,000 workers and 27 tons of dynamite to break through the rock.  After the completion of the canal, the cut was renamed the Gaillard cut after Major David du Bose Gaillard who oversaw the effort.

The Gutan and Miraflores man-made lakes are vital to the canal. Vessels coming from the Atlantic to the Pacific enter the channel at Limon Bay in Costa Rica to the Gatun Locks.   The Gutan locks are a series of three locks that lift the ships and boats 85 feet to Gutan Lake. The channel through Gutan Lake is about 23 miles long at which point the vessels reach Gamboa for the 8 mile passage through the Gaillard/Culebra Cut through the Continental Divide to the Pedro Miguel Locks.  At this point, the ships are lowered 30 feet to Miraflores Lake.  This man-made lake sits about 50 feet above sea level. The next set of locks are the Miraflores Locks that lower the ships and boats to sea level.  The final stage is to pas through the 7 mil long canal and into the Pacific Ocean.   Total passage time is about 10 hours through the 50 miles of canal. An average of 13,000 to 14,000 ships utilize the canal every year. Ships wait patiently for their turn to go through the locks. Ships can reserve their spot to go through the canal up to a year run advance and it can cot as much as $500,000 or more to pass through.

In 1999, Panama took over the control and responsibility of the canal.  New locks were started in 2007 and completed in 2016 which makes it possible for larger ships to navigate the canal.  It remains one of the most important and strategic achievements in modern times. The original locks continue to operate as they are vital to keep the world’s goods moving.

The new locks are on the left, while the original logs are on the right side. If a ship can fit in the old locks, then they must go to the right. Our ship, the Island Princess fit by one mere foot. On either side there was only approximately 18″ of space from the ship to the wall.

Our day through the Panama Canal was fascinating as I was able to traverse the canal that I had only read about in history books as a child.